Editorial courtesy of the Australian.

Many retirees would like to keep working for a few extra years.

Policymakers looking to retraining programs and skilled migrants to fill skill shortages as the economy roars back from the pandemic should not overlook a potentially rich source of experienced and often highly skilled workers – retirees. Many retirees would be happy to work for a few extra years, at least part time, to postpone dipping into their superannuation nest eggs, during which time of course they also would be paying income tax. More important, they would be contributing to an economy in which nine in 10 jobseekers unfortunately lack the requisite training needed for the vast majority of available roles, according to new analysis by the federal Department of Education, Skills and Employment.

On Monday, Stephen Lunn reported that Australia is ranked 18th among 37 OECD countries for labour force participation of 55 to 64-year-olds, at 67 per cent, and it is below average for people aged 65 or older. In the interests of Australians over 55 and the economy, the nation needs to do better. As life expectancy continues to increase, more and more years spent in retirement may not be an attractive option for many older people, Lunn wrote, along with the worry about how to maintain their standard of living for decades after leaving their employment.

National Seniors chief advocate Ian Henschke said something was wrong in the design of Australia’s pension system when only 14.2 per cent of people aged 65 and older were in the workforce, compared with 25 per cent in New Zealand. If just 5 per cent of the 2.6 million retirees receiving the pension chose to work it would boost the workforce by 130,000 people.

It should be encouraged. But allowing workers to receive a government pension in addition to their salary, as some seniors advocates want, would be the wrong approach. The social security bill and dependence on government need to be reduced wherever reasonable.

Australian Chamber of Commerce and Industry chief executive Andrew McKellar suggested the government raise the income threshold before pensioners were taxed on their work as an incentive for more pensioners to take on at least some work. Skilled Age Pension recipients had very little incentive to re-enter the workplace, Mr McKellar said. But an army of older workers was ready and willing to return to the workplace, he added. A single pensioner can earn only $7800 a year before they start losing their pension. In their own interests, employers should be willing to offer positions to qualified older workers. In recent years, many older people willing to work have found their age was a disadvantage in getting jobs they applied for.

An analysis by KPMG has called for ramping up the annual migration intake to 350,000 between now and the end of the decade to offset the collapse in population growth during the pandemic and add $120bn to the size of the economy by 2029. Government projections have the migrant intake returning to 235,000 people a year from 2024-25. Josh Frydenberg said Australia was beginning to welcome migrants again but would do so “in a considered way and a way that will strengthen our economy” at a time when the jobs boom had driven unemployment down to 4.6 per cent. Acting opposition immigration spokesman Andrew Giles said Labor favoured giving “Australians a first go and a fair go to fill job vacancies”. But if the yawning skills gap is to be plugged by Australians, the training and education systems will need major reform. 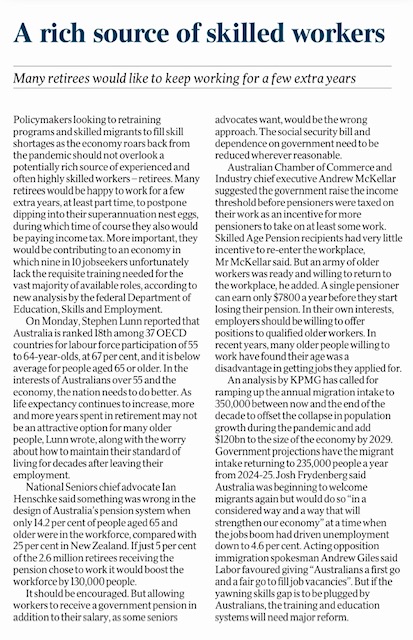