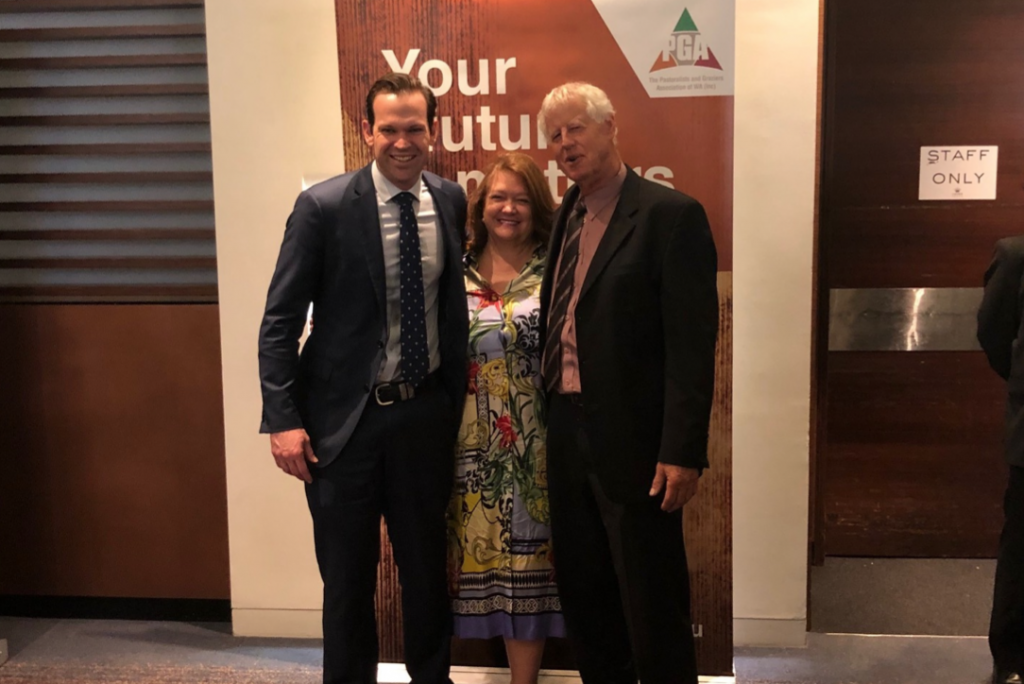 It is a great honour to be here as part of the third National Agriculture and Related Industries Day. Thank you to Tony Seabrook and the Pastoralists and Graziers Association for organising this conference today. I would also like to recognise Mrs Gina Rinehart, the founding patron of the National Agriculture and Related Industries Day, and Mr Kim Beazley, the Governor of Western Australia.

I have just got off a 31-hour (with stopovers) flight from Washington DC, so please excuse me if I am a little slow this afternoon! On Monday in DC, I met with the US Secretary of the Interior, David Bernhardt. In his office there is a beautiful painting of the construction of the Hoover Dam.

The Hoover Dam was more than just an enormous engineering feat, it also helped change the world’s view of agricultural development. The dam had been the idea of John Powell, a veteran of the Battle of Shiloh, were he lost an arm. Despite only having one arm, John led the first American expedition of the wild Colorado River and the Grand Canyon in 1869. In 1878, John Powell produced a report on western US agricultural opportunities titled The Report on the Arid Land of the Arid Region of the United States – and remember Powell supported the development of this self-described arid region!

He did disagree, however, with some of the common views of the time. Then, there was a view that the west could be developed according to a Jeffersonian ideal of small, independent, yeoman farmers without the need for government involvement that would dilute Americans’ well-known aptitude for individual enterprise. Powell disagreed. He became a champion for large government-funded dam projects as the only way to harness the wild rivers and irrigate the arid lands of the Colorado Basin.

Powell did not live to see his vision become a reality. Technological and political developments in the early 20th century, however, did result in an amazing manifestation of Powell’s dreams in the form of the then named Boulder Dam – later renamed the Hoover Dam. In opening the dam in 1936, President Roosevelt paraphrased Julius Caesar “I came, I saw and I was conquered”.

What are the lessons of this for us? I think they remain that the opening up of new agricultural areas has always involved a healthy degree of large scale government investment.

A few years ago the CSIRO looked closely at a number of agricultural initiatives in Northern Australia and found that: All four of the continuing large scale (> 10,000 ha) irrigation schemes (Ord, Burdekin, Emerald and Mareeba-Dimbulah) have received significant government investment … With the exception of Katherine and Lakeland Downs, all of the private agricultural development schemes that had little or no direct government investment, particularly in infrastructure, have not persisted.

That is why the Federal Government has been leading the push to build the water infrastructure that will help double our agricultural production by 2030. When we came to government six years ago, no one was talking of building dams and we had lost a generation with no dams being built. We have changed the conversation and things are now happening.

This week construction of the Rookwood weir in the Fitzroy Basin near Rockhampton began.

Last month contracts were signed to begin the Hells Gate Dam near Townsville, and the Federal Government announced investments of over $500 million in three dam projects in New South Wales. All up now the government has invested around $1.5 billion in new water projects across the country.

The CSIRO concluded that almost 200,000 hectares of land could be irrigated in the Fitzroy using a combination of on-farm dams and groundwater. To put that in context that is more than six times the size of the Ord. There is enormous potential.

We are often told to listen to this science. Well the science is in. We can develop the water and soils of our vast country and do so in a way that grows more food without damaging the environment. These conclusions were drawn by 100 of our top scientists at the CSIRO working for over a year. Of course, the naysayers were out of the blocks quickly, that respected scientific organisation GetUp! said on the release of the report that dams “wreak havoc on ecosystems”. While the Labor Party dismissed the report as a “thought bubble”.

What the CSIRO’s work shows is that it has never been a lack of good soils or lots of water that has restricted intensive agricultural development of our north. It has been a lack of people. The lack of people in Northern Australia in particular has limited the size of the market to make it hard to get a diverse agricultural districts up and running.

We are not going to be able to create towns of millions of people in Northern Australia overnight but we can provide better market access to the countries of Asia where there are billions of people.

We have worked hard to open new markets and over the last few years. Since 2013, the Australian Government has concluded eight new trade agreements and the vast majority of our exports are now covered by free trade agreements. Key wins for agriculture have included better beef access to Japan, Korea and China, and more consistent access for the live cattle trade with Indonesia.

It is unfortunate that India could not reach agreement to be included in the final agreement.

However, I remain hopeful of stronger trade ties with India in the future. There is a logical, synergy between the development of the Fitzroy basin in Western Australia and the growing food needs of the subcontinent. There are three main reasons that WA agriculture and the development of the Indian economy make sense: geography, diet and weather.

The seasons are at different times of the year and the Indian Ocean dipole effect means that when it is wet in north-western WA it is often dry on the subcontinent, and vice-versa. Thinking of India and Western Australia as a connected food bowl makes abundant sense.

Making such a partnership will have to be approached carefully. Australia can never replace the farming needed in Asian countries. Even today Australia only produces enough food for about 60 million people. We hope to double that by 2030 but even if we do we will then feed just over 120 million. We will be a long way from being able to feed India, let alone many of the other countries we already supply.

Still, India will face a major challenge feeding itself as its demand for high quality proteins increase alongside its economic growth. As a recent academic paper concluded last year: Under India’s current self-sufficiency model, our analysis indicates severe shortfalls in availability of all macronutrients across a large proportion (>60%) of the Indian population. The extent of projected shortfalls continues to grow such that, even in ambitious waste reduction and yield scenarios, enhanced domestic production alone will be inadequate in closing the nutrition supply gap. We suggest that to meet SDG2 [Zero Hunger] India will need to take a combined approach of optimising domestic production and increasing its participation in global trade.

What Australia can do though is provide an important buffer to guarantee a country’s food security during droughts and other interruptions to a nation’s food supply. We are helping do that right now in China as they respond to the swine flu crisis.

We also suffer our own interruptions from time to time and we are seeing that starkly at the moment with one of the worst droughts in our history. There is so much suffering for many in the farming community and it is hard to see. What we can do is provide assistance to relieve suffering, however, governments can never completely remove it.

We have provided over $8 billion of funding towards the response to this drought. As the drought has gotten more severe we have made a greater response. Just a fortnight ago we announced that we would fire up the Adelaide Desalination Plant so that we could provide more water to desperate farmers. The capacity of this plant is only 100G a year so it will not help everyone, but it will make an important contribution. We will ensure that this water goes to those doing it tough and it will be used to grow fodder to keep livestock alive (especially the all-important breeding stock) and to help the dairy industry.

A double blow hit the other day when farmers already suffering with drought have been hit by bushfires. One of the fires started just around the corner from where I live. It has destroyed over 10,000 hectares of farming land and an entire lychee orchard.

There are those saying that climate change is increasing fire risk in Australia. I think the evidence for this is more complicated than is often made out, but there is enough there that we should make some response.

The key point is, however, that if the risk is higher, we should be doing more to mitigate and reduce that risk. That means more cool burns, that means more fire breaks and that means less restrictions on farmers clearing their own land. Instead state governments, like mine in Queensland, are doing less to reduce fuel loads, and they are putting more red tape on farmers just trying to manage their own land. We have to hit reverse on these wrong-headed policies in light of these fires.

It is the same with the broader ideas I have placed here to expand our agricultural opportunities – too often government red tape holds our farmers back from reaching their true potential. I started this speech by recounting how a one-armed man overcame his disability to help contribute towards the building of perhaps the greatest dam in history.

Our farmers are a bit the same except they have governments who tie one arm behind their backs. Like John Powell, our farmers still get things done. Look at what Gina has achieved in agriculture and mining despite the thousands of regulations she has had to navigate.

But imagine what we could all do with two arms. I am committed to doing what we can to remove that red tape, to fulfil our potential to develop our great country and to help provide food to a growing world.