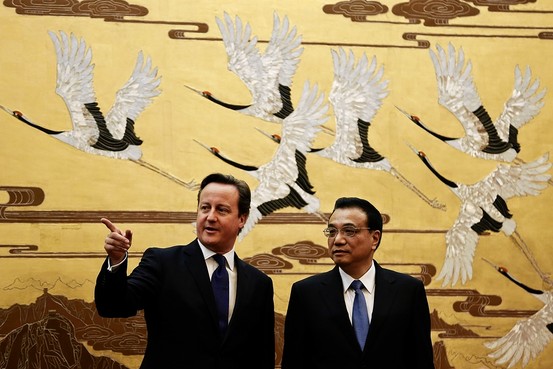 U.K. Prime Minister David Cameron, left, talks with Chinese Premier Li Keqiang at a ceremony in the Great Hall of the People, in Beijing on Monday. Getty Images

BEIJING—China’s central bank said it would ease the way for foreign investors to plow money into a highly touted free-trade zone in Shanghai and let Chinese residents use the zone as a base for investment overseas by loosening restrictions on investment flows that apply elsewhere in China.
In relaxing some controls, the People’s Bank of China also made clear that it won’t let the free-trade zone become a back door to circumventing long-standing financial-sector restrictions throughout China. A blueprint unveiled on Monday essentially sought to erect a wall around the 11-square-mile China (Shanghai) Pilot Free Trade Zone and prevent money from seeping out of the zone into the rest of the country.
Within the zone, the central bank will continue to tightly manage the yuan’s value as it does elsewhere in China and won’t allow the market to set exchange rates. Any experimentation with deposit rates would be limited to foreign-currency accounts—a minor part of the Chinese financial system. 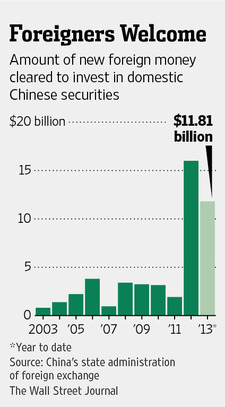 The central bank didn’t offer a timetable for changes or detailed regulations, which would come later, though it did promise to be “reform and innovation-minded and carry out trials” in the zone.

“China will test and liberalize step-by-step to gain experience,” said Justin Yifu Lin, a former World Bank chief economist who now teaches at Peking University. “If the experiments work and the conditions are right, [the authorities] can extend the reforms to other regions.”
Among the most significant changes the PBOC laid out are those that concern investment in securities. Although China has permitted cross-border flow of currency for foreign trade and investment in factories, the central bank has sharply limited funds entering and leaving the country for financial investments. Many Chinese policy makers believe that the country’s largely closed financial system saved China from the financial crisis that swept through Asia in 1997 and 1998.
In the Shanghai zone, by contrast, foreign investors, foreign banks and other companies registered there will be allowed to invest in the city’s securities market, the PBOC statement said. At the same time, Chinese investors in the zone will be allowed to invest in overseas securities. Currently, Chinese nationals can invest overseas only in a limited number of funds that have been cleared by regulators to exchange a certain amount of yuan into foreign currency—as a way to limit the amount of money going out of the country.
The statement also said that foreign financial institutions in the zone will be allowed to borrow yuan from overseas, which could boost their funding base. That is different from elsewhere in China where foreign banks are hobbled by tight limits on how much they can borrow from overseas to lend domestically. Foreign bankers say that the new rules could help them compete inside the zone against Chinese banks, which have huge yuan deposits and so have little need to borrow overseas.
The PBOC blueprint comes several weeks after the end of a Communist Party conference that produced a sweeping plan for overhauling the Chinese economy, so it relies more on market forces and consumer spending, rather than exports abroad and investments in capital-intensive industries at home. That plan was short on specifics, which Chinese agencies are now beginning to flesh out.
The Shanghai Free Trade Zone, which has been pushed by China’s Premier Li Keqiang, features prominently in the party’s economic reform plan as a test-bed. But designing the zone has engendered big fights within the government, according to Chinese regulatory officials and economists. Mr. Li didn’t show up for the free-trade zone’s opening in September—a sign, Chinese officials said, of infighting.
Initially, the central bank and other financial regulators fought the zone, according to Chinese officials. Regulators and economists argued that walling it off from the rest of the country on financial matters reduced its effectiveness. On the other hand, allowing changes in the zone to quickly spill over into the rest of China would amount to haphazard liberalization, they said.
The PBOC has sought a national—not piecemeal—rollout of financial reform, PBOC and banking-industry officials have said. These officials worry that opponents of financial liberalization could use the zone as a delaying tactic, by arguing that any change must be tested first in Shanghai. For instance, China’s largest state-owned banks have applied for permission to issue their first certificates of deposits throughout China. But the PBOC blueprint suggests that approvals would first come in the Shanghai zone.
Courtesy of the Wall Street Journal