Mrs Rinehart was awarded a Lifetime Achievement Award for her leadership in the mining and resources sector, and for her contribution to the development of that sector throughout her adult life.

Her leadership has included founding and patronage of Australia’s annual National Mining and Related Industries Day, many speeches on behalf of the industry and quarterly contributions to Australia’s Resources and Investment Magazine publication, founding and chair of Australians for Northern Development and Economic Vision (ANDEV), and two books, the most recent one called “From Red Tape to Red Carpet.”

Roy Hill, of which Mrs Rinehart is also executive chair, was also recognised, winning the Rising Star Company Award for its spirit, milestones and impressive achievements as a largely Greenfield mega mine.

Accepting the Lifetime Achievement Award in London, Mrs Rinehart said she was very delighted to be acknowledged for a lifetime’s commitment and dedication to the mining and resources industry, most recently culminating in the highly successful delivery of the US$10 ($13.49) billion Roy Hill iron ore project.

“The mining and resources industry with its many related industries is, I believe, a very important contributor to our country, and helps to maintain and improve living standards, so it means a lot to me to be recognised by my peers at these internationally renowned prestigious awards,” Mrs Rinehart said.

“There are many people who support me with these endeavours, especially Tad Watroba and my executives and my other hard-working, long-term and dedicated staff. We are also proud of our endeavours over decades at Hope Downs, three major mines were built there with our more recent partners, Rio Tinto, and a fourth is under development.”

Speaking following Roy Hill’s rising star win, Mrs Rinehart said of the project “we started very small, with very little money to spend, and worked hard to explore, finding the deposits which now form the Roy Hill operations, tenements another company had held for a long time, but chose to drop, believing of negligible value. Over many years we studied and progressed towards development despite all the thousands of government approvals permits and licences and other significant risks and roadblocks placed in front of us.”

“Roy Hill has achieved significant milestones – we are ramping up to be Australia’s single largest iron ore mine, we are the fastest to achieve shipment of 35 million tonnes and while doing so, maintained an above industry average safety record and female participation rate. We secured the world’s largest debt funding package for a mainly Greenfields land-based mining project from 19 of the largest banks in the world and five Export Credit Agencies, we use some of the world’s largest equipment in the mining industry, and Roy Hill marked the largest ever commercial deal between Australia and South Korea,” Mrs Rinehart said.

“It has been a mammoth team effort to successfully manage the project from bankable feasibility to construction and ultimately to project operation and ramp up. Huge thanks to our partners, executives and every person who has contributed.”

Fortescue Metals Group (FMG), one of the world’s largest iron ore producers won the prestigious Metals Company of the Year award at the fifth annual Platts Global Metals Awards, which recognize exemplary performance in 15 categories across the steel, metals and mining complex.

FMG was one of 15 honorees from four continents heralded at the black-tie gala in central London. The event, hosted by S&P Global Platts, was once again emceed by CNBC’s Karen Tso and attended by more than 250 industry executives.

“Under the leadership of CEO Nev Power, Fortescue Metals Group has rapidly risen to become the fourth largest iron ore producer in the world in little over a decade. We congratulate Fortescue Metals Group on this impressive win,” S&P Global Platts President Martin Fraenkel said. “Each of this year’s winners and finalists deserves praise for their contributions to a more efficient, innovative and globalised industry that continues to rise to new challenges.”

Fortescue Metals Group won the 2017 Metals Company of the Year title as well as the Industry Leadership Award – Raw Materials & Mining. In reaching its decision, the Platts Global Metals Awards’ independent judging panel lauded the company’s “strong and clever” leadership. FMG, which won the Rising Star Company Award in 2014, was praised by the judges for “achieving ambitious goals and hitting targets” making the firm one of the industry’s strongest and most resilient. 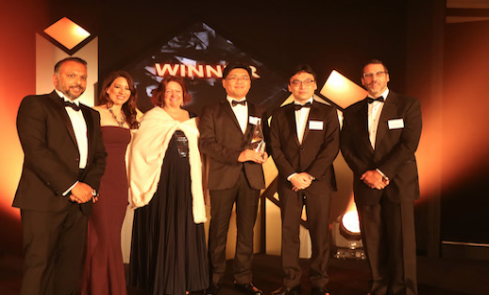 Courtesy of the National Mining Chronicle