6 January 2015
The Gympie Times
SCHOOL is out for another three weeks but for thousands of Gympie region workers it was back to business yesterday after a hot, humid Christmas-New Year break.
As rain fell on our drought- declared countryside, rural, business and civic leaders looked ahead to the new year with optimism and excitement.
This year will be a momentous one politically, with the election of a new mayor and new State MP, and possibly a small reshuffle of the Gympie Regional Council.
Outgoing State MP David Gibson – who has ruled out running for mayor – believes good, broad economic indicators such as the lower Australian dollar, free trade agreement with China and falling fuel prices will create opportunities for local agribusinesses, exporters and tourist operators.
Economic interest in the Gympie region will intensify as the $500 million Hope Dairies and $50 million Australian Quarter Horse Racing projects move forward, generating opportunities for growth and investment, Mr Gibson said.
Construction is also expected to begin this year on Gympie’s $20 million aquatic centre.
“Lower commodity prices are also likely to have an impact on businesses who service the mining sector and a possible slowdown in any exploration in our region, but I would expect there will remain a demand for high-quality Australian resources required for Asian growth,” Mr Gibson said.
Chamber of Commerce president Ben Ellingsen says the region is in for a “significant year” and that local real estate agents are reporting “plenty of activity in the housing market, particularly in the investor sector”.
Acting Mayor and the LNP candidate for Gympie Tony Perrett says this will be “the year of opportunity for the Gympie region”.
“As the Bruce Hwy continues its upgrade to double lanes, further economic interest will develop across our region,” he said yesterday.
“The recent announcements in dairying, manufacturing and racing are exciting prospects for existing and new businesses.
“While Australian economic conditions are challenging, the region’s diverse economic base will provide opportunities for growth in our local economy.
“Agriculture, manufacturing, tourism, housing and development, education, service and retail industries are all well positioned to consolidate on their role of growing the region.”
Cr Perrett said well-below average rainfall for most of 2013-14 had placed significant and ongoing financial pressure on farmers.
“The region is still officially drought-declared,” he said.
“I’m hopeful that recent relief rainfall will see an end to one of the worst droughts in recorded history.
“The mood among farmers is certainly much better than two months ago.
Businessman, realtor and dairy farmer John Cochrane says the rural sector will reap the rewards of price, volume, weather and the Australian dollar this year.
“We could not have had a better opening to 2015,” he said.
Beef producers will benefit from reduced stock numbers and high demand, the dairy industry will benefit from the Gina Rinehart deal and rural land values will benefit from the diminishing time it takes to travel from Gympie to Brisbane and the coast.
“Twenty minutes south of Gympie, in Pomona and Cooroy, you pay $100,000-$120,000 more for a similar property.” While the ongoing upgrading of the Bruce Hwy would not eliminate that difference altogether, it would reduce it, he said.
“When the road is complete more people will commute from Gympie and real estate prices will firm.” 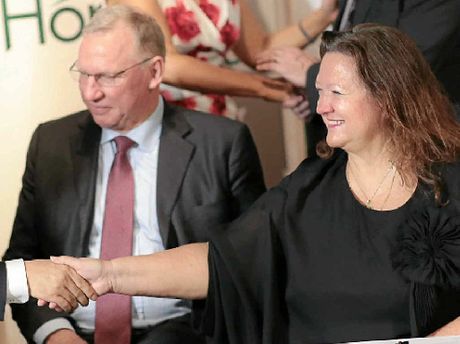 GOOD YEAR: Gina Rinehart and Deputy Premier Jeff Seeney sign the Memorandum of Understanding for a $500 million dairy project in the Gympie and South Burnett regions.
Courtesy of The Gympie Times