18 November 2014
Coolum News
TALKS will start in earnest on a new trade deal with India next month.
The announcement was made only a day after Prime Minister Tony Abbott sealed a similar deal with China.
A trade deal with India could be under development as early as next year after Indian Prime Minister Narendra Modi visited parliament in Canberra on Tuesday.
A statement from Mr Abbott’s office also said official talks on the potential “economic agreement” would continue in December.
But it was not the only outcome of Mr Modi’s visit to Canberra.
The prime ministers also gave the green light to a new security agreement to strengthen ties between the nations’ law enforcement agencies.
That memorandum of understanding focuses on fighting narcotics smuggling and developing police ties, as well as a “prisoner transfer” agreement.
The transfer agreement will allow Australian prisoners held in India to apply for a transfer to Australian jails and vice versa.
After a hearty welcome, Mr Modi told parliament he saw Australia as a “vital partner” in India’s “quest for progress and prosperity”.
“There are few countries in the world where we see so much synergy as we do in Australia,” he said.
“India a nation of more than a billion seeking development; Australia a developed country of a few million people and vast resource.”
Mr Abbott said he and Mr Modi had also spoken about ways to “crank up” the trade relationship, describing a trade deal with India as Australia’s next priority. 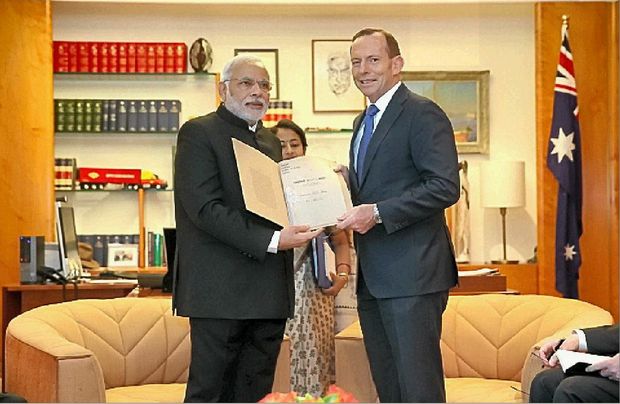