9 April 2015
Sunshine Coast Daily
The Bruce Highway received a major boost today with tenders now being sought for an early works package as part of the $624 million Cooroy to Curra – Section C project, south of Gympie.
At the Kybong Hall, Prime Minister Tony Abbott said the delivery of jobs, productivity gains and economic growth are central to the Commonwealth Government’s unprecedented $50 billion infrastructure investment.
“The Bruce Highway is the lifeblood of Queensland,” he said.
“It is the gateway to northern Australia. It’s one of the most important components of our national highway system, facilitating the movement of people and goods across the state to domestic and overseas markets.
“This upgrade is essential for Queensland and for Australia to remain prosperous and meet the challenges and opportunities of the future. We said we would build the roads of the 21st century and that means investing in critical road infrastructure like the Bruce Highway.
“The start of the tender process for the early works package on this project is a direct reflection of the Commonwealth Government’s jobs and infrastructure plan, fulfilling a key election commitment to improve the Cooroy to Curra stretch of the highway.”
Deputy Prime Minister and Minister for Infrastructure and Regional Development Warren Truss said upgrading the Bruce Highway is a major pillar of the Australian Government’s infrastructure investment plan – with $6.7 billion committed towards upgrades.
“When completed, the Cooroy to Curra – Section C will deliver a safer, less congested section of highway, with a greatly improved capacity to move freight more efficiently along the coast,” Mr Truss said.
“This will support major industries in the region, including timber, dairying and local agriculture, supporting not only Queensland’s economy but the national economy more broadly.
“This early works package will upgrade the highway between Woondum Road and the Six Mile Creek rest area and will be delivered in advance of further major works to come.
“These early works involve widening the existing highway and building a raised median to separate opposing directions of traffic. Dedicated right and left-turn lanes will be built at the Keefton Road and Six Mile Creek rest area intersections to provide protection for turning vehicles.
“Protected entry lanes for north and southbound traffic will also improve access to the Gold Nugget service station, where several crashes have occurred in recent years.”
Queensland Minister for Main Roads, Road Safety and Ports Mark Bailey said upgrading the Bruce Highway will deliver benefits not just for freight operators, but for motorists and residents in general.
“The Bruce Highway is regarded as one of the most dangerous highways in Australia and the Cooroy to Curra section of road, in particular, has experienced too many fatalities in recent years,” Mr Bailey said.
“We are all looking forward to a reduction in road accidents that this upgrade will help to achieve, along with the improvements to road efficiency.”
Queensland Member for Gympie Tony Perrett said the early works would deliver immediate safety improvements, benefitting the local community.
“The Cooroy to Curra – Section C project will see the Bruce Highway realigned and duplicated between the Traveston Interchange and the proposed Woondum Interchange north of Woondum Road,” Mr Perrett said.
“I would encourage local businesses to consider tendering for the early works package, ensuring the community benefits from the job creation this project will bring.”
Detailed design for the remainder of the Cooroy to Curra – Section C project is currently underway, with major works expected to start in early 2016.
Section C project works are being jointly funded by the Commonwealth and Queensland Governments, with $499.4 million and $124.9 million contributed respectively. 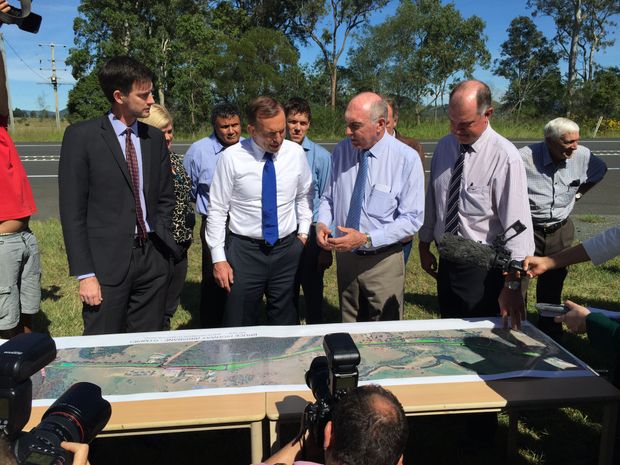 Courtesy of the Sunshine Coast Daily