Article by Paul Dibb courtesy of the Australian. 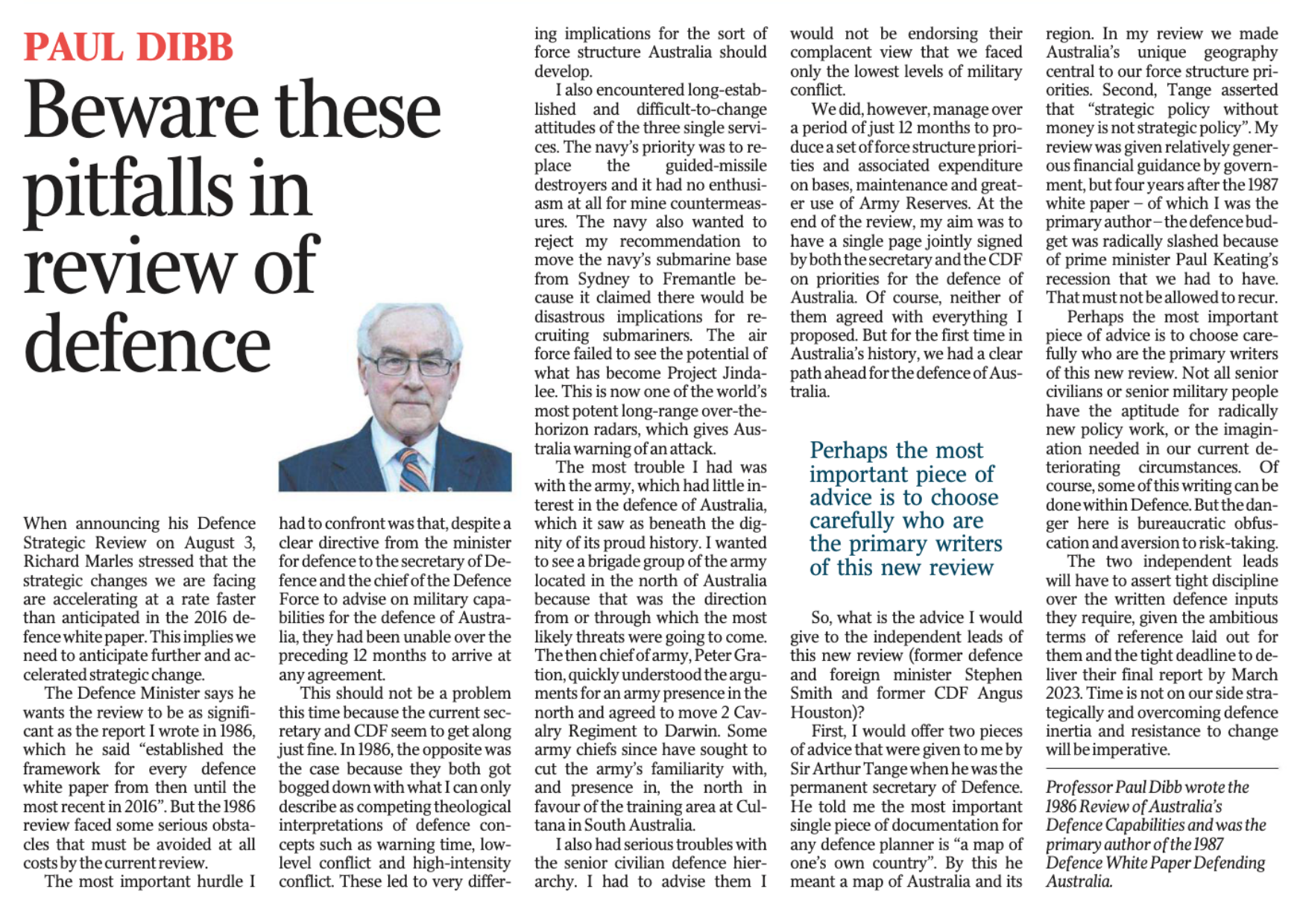 When announcing his Defence Strategic Review on August 3, Richard Marles stressed that the strategic changes we are facing are accelerating at a rate faster than anticipated in the 2016 defence white paper. This implies we need to anticipate further and accelerated strategic change.

The Defence Minister says he wants the review to be as signific`ant as the report I wrote in 1986, which he said “established the framework for every defence white paper from then until the most recent in 2016”. But the 1986 review faced some serious obstacles that must be avoided at all costs by the current review.

The most important hurdle I had to confront was that, despite a clear directive from the minister for defence to the secretary of Defence and the chief of the Defence Force to advise on military capabilities for the defence of Australia, they had been unable over the preceding 12 months to arrive at any agreement.

This should not be a problem this time because the current secretary and CDF seem to get along just fine. In 1986, the opposite was the case because they both got bogged down with what I can only describe as competing theological interpretations of defence concepts such as warning time, low-level conflict and high-intensity conflict. These led to very differing implications for the sort of force structure Australia should develop.

I also encountered long-established and difficult-to-change attitudes of the three single services. The navy’s priority was to replace the guided-missile destroyers and it had no enthusiasm at all for mine countermeasures. The navy also wanted to reject my recommendation to move the navy’s submarine base from Sydney to Fremantle because it claimed there would be disastrous implications for recruiting submariners. The air force failed to see the potential of what has become Project Jindalee. This is now one of the world’s most potent long-range over-the-horizon radars, which gives Australia warning of an attack.

The most trouble I had was with the army, which had little interest in the defence of Australia, which it saw as beneath the dignity of its proud history. I wanted to see a brigade group of the army located in the north of Australia because that was the direction from or through which the most likely threats were going to come. The then chief of army, Peter Gration, quickly understood the arguments for an army presence in the north and agreed to move 2 Cavalry Regiment to Darwin. Some army chiefs since have sought to cut the army’s familiarity with, and presence in, the north in favour of the training area at Cultana in South Australia.

I also had serious troubles with the senior civilian defence hierarchy. I had to advise them I would not be endorsing their complacent view that we faced only the lowest levels of military conflict.

We did, however, manage over a period of just 12 months to produce a set of force structure priorities and associated expenditure on bases, maintenance and greater use of Army Reserves. At the end of the review, my aim was to have a single page jointly signed by both the secretary and the CDF on priorities for the defence of Australia. Of course, neither of them agreed with everything I proposed. But for the first time in Australia’s history, we had a clear path ahead for the defence of Australia.

So, what is the advice I would give to the independent leads of this new review (former defence and foreign minister Stephen Smith and former CDF Angus Houston)?

First, I would offer two pieces of advice that were given to me by Sir Arthur Tange when he was the permanent secretary of Defence. He told me the most important single piece of documentation for any defence planner is “a map of one’s own country”. By this he meant a map of Australia and its region. In my review we made Australia’s unique geography central to our force structure priorities. Second, Tange asserted that “strategic policy without money is not strategic policy”. My review was given relatively generous financial guidance by government, but four years after the 1987 white paper – of which I was the primary author – the defence budget was radically slashed because of prime minister Paul Keating’s recession that we had to have. That must not be allowed to recur.

Perhaps the most important piece of advice is to choose carefully who are the primary writers of this new review. Not all senior civilians or senior military people have the aptitude for radically new policy work, or the imagination needed in our current deteriorating circumstances. Of course, some of this writing can be done within Defence. But the danger here is bureaucratic obfuscation and aversion to risk-taking.

The two independent leads will have to assert tight discipline over the written defence inputs they require, given the ambitious terms of reference laid out for them and the tight deadline to deliver their final report by March 2023. Time is not on our side strategically and overcoming defence inertia and resistance to change will be imperative.

Professor Paul Dibb wrote the 1986 Review of Australia’s Defence Capabilities and was the primary author of the 1987 Defence White Paper Defending Australia.