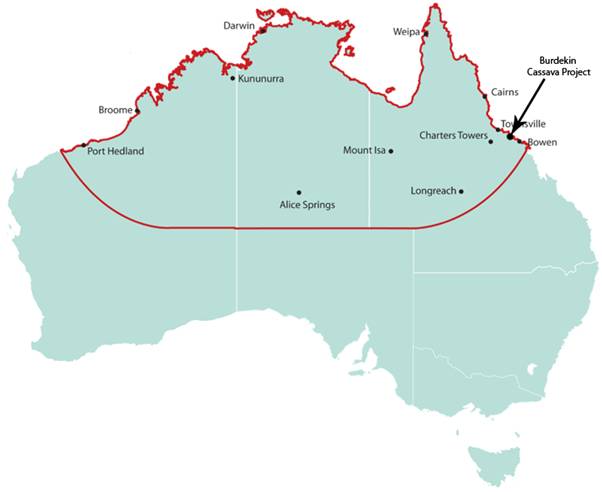 The following is the story of a project embarked upon by Cass Tech Ltd (CTL) and their struggles to overcome the burdensome yoke of bureaucracy in Brisbane and Canberra.

It is the story of an enterprising agriculturalist and his struggle with government bureaucracy. This struggle has taken nearly 4 years and is far from over yet.

First comes the development approval phase. This is the point at which the government tells the company whether they are allowed to develop a piece of land and, importantly, whether a piece of land can be cleared.

In order to start the project CassTech had to have their Land and Water Management Plan “reviewed” in order to then purchase water to use for the project. This review process takes a long time and only if it is approved can the company then go ahead and buy water. The price of this water is then regulated by the ACCC anyway, meaning there is no return on a company’s investment.

Stewart Peters (CEO at CassTech) commented that this “is nothing to do with farming as such, it’s a means of government stopping you from buying water if they want to stop you.”

What struck Stewart and Stewart’s financier was the pointlessness of some of the testing procedures, such as soil testing, that they have to do as part of their Land and Water Management Plan.

Once a company is able to get past the land and water usage regulations, they must then deal with the process of applying for development and having their application reviewed.

It is here that a potential project that could provide employment and opportunity in North Australia comes up against a wall of bureaucracy yet again. If there are trees on the property, often there is almost no chance that a development application will be successful.

To actually get authorisation to clear trees the project must fulfil the criteria of being a “state significant project” – which is nearly impossible if all you want to do is build a farm, or even a simple shed as in CassTech’s case. This means though that for many (if not, most) developers the project is over before it has even begun!

On the other hand, if you are part of a much wider project or you are the government, authorisation is much easier to obtain.

But then the goalposts change.

Since CassTech’s project began 3-4 years ago, many changes have been made to the regulation of trees and native vegetation.

For instance, the government decided to switch to a policy of quarantining wetlands. When the “wetlands” on the property were actually investigated, much of them were found not to be wetlands at all. What constituted a wetland had been determined by a completely arbitrary rating scheme which used nothing more than desktop mapping performed in Brisbane.

On top of this, CassTech had to pay to have their land assessed, which involved flying people out from Brisbane to perform the assessment. The whole exercise cost $30,000 and took between 6 to 12 months.

As bad as the regulatory burden from Brisbane can be, Canberra is worse. Federal regulation is constantly inconsistent in how it applies to projects. States are generally better in this regard. Sadly though, the states are often not allowed to cover these issues and the Federal government, which has nowhere near the same level of sophistication in its regulation, takes over wherever it can.

Not only is the bureaucracy a burden, the bureaucrats themselves are often completely unsympathetic to people that require assistance. On this project, bureaucrats were sometimes aggressive towards Stewart and even threatened him with jail when he asked for a clarification on when he can proceed planting the cassava plant.

One example which shows the confusion with which a lot of government regulation is applied in practice was when Stewart and his financier sought to have the land tested to make a fair and good assessment of the land’s potential. They were both told that since they had put in an application to develop the land they could no longer test the land. This logical dead-end creates a situation which pretty much puts a stop on projects, because without proper testing projects simply cannot proceed, and the entire situation becomes unworkable.

Stewart concludes that throughout the affair the bureaucracy was obstructionist. The increasing politicisation of regulation means that companies often get “beaten up” by bureaucrats. Ultimately, CassTech got over the problem by going over the bureaucrats’ heads and speaking directly to Wayne Swan’s office. Only after it had secured a meeting with him did the approval process quicken.

But even after the land and water stage and the development stage, there are still more hoops to jump through. The next stage involves various operational approvals which again include environmental approvals regarding water use.

This time if a property owner intends to conduct any works on water ways leading into the Great Barrier Reef, the Environmental Protection Act (1994) must be consulted. This act is a mammoth document consisting of 700 pages, and is often very difficult for companies and farmers to understand. Stewart and his financier had to employ legal consultants to help interpret the act. Talk about a lawyer’s picnic.

Not only was this not a simple process, but the consultants prices are based on the mining market, not the agricultural market, so the land owners end up paying rates that are completely unequal to the costs of their business. In a highly competitive market this is a heavy cost that will weigh down even bigger agribusiness. As Stewart told ANDEV in frustration: “Once you realise all this – you would never start.”

How is the North of Australia to develop and grow when government regulation stops individuals from doing business, and ties them up with years and years of applications and pointless testing?

The location of this project, the Burdekin, has abundant water in a fertile delta.  It is Australia’s largest and most productive sugar cane growing and processing area as well as a large producer of cattle in the hinterland. Townsville, which is just to the north of the Burdekin, is a major industrial centre for copper, lead and nickel refining as well as meatworks processing.

The benefits of planting Cassava in this region would be numerous.

It would greatly increase agricultural efficiency and production in the region. Cassava produces a kind of starch which can be used as a versatile feedstock, high protein foliagewhich can be used to produce stock feed too and a fibrous stemwhich can be dried and used for renewable biofuels.

The regulatory hurdles that many companies have to go through to engage in positive and productive development in North Australia are often intensely time-consuming, inefficient and can result in the project being put on hold for years or never going ahead at all. This is a vital issue if North Australia is to improve productivity and become a centre of economic growth in Australia.

It is awful to think how many entrepreneurs are deterred in the first stages of approval or lose their capital funding, how much wealth goes uncreated, and how many new jobs go begging, all because of the stifling burden of bureaucracy imposed on North Australia.