Article by Patrick Commins courtesy of the Australian.

Soaring coal and gas exports, turbo­charged by the Ukraine war, have driven the largest trade surplus in the nation’s history, filling government coffers and potentially halving the forecast budget deficit for the past financial year.

An ongoing commodity price boom drove the nation’s trade surplus to a record $17.7bn in June, ­according to figures from the Australian Bureau of Statistics, leaving the trade balance for 2021-22 more than 54 per cent higher at an unprecedented $137.4bn.

CBA senior economist Belinda Allen described the trade figures as “truly extraordinary in the context of where we were in 2016, when we were recording very persistent deficits”.

“Australia exports what the world wants, and that’s true in markets disrupted by the Ukraine war, such as grain, coal and gas,” Ms Allen said.

Department of Finance figures show the federal budget deficit over the financial year to May running $27bn smaller than Treasury anticipated as recently as April’s pre-election update.

Ms Allen said it was possible the deficit could be half the projected $79.8bn, “reflecting not just the trade side, but a better performing economy as well”.

The final budget outcome for 2021-22 is due by the end of September. Despite evidence of a better than anticipated budget outcome, Jim Chalmers in last week’s economic update to parliament warned that the nation’s fin­ances still remained in a perilous state and foreshadowed a conservative October budget.

Arguing that the $1 trillion in debt had left no fiscal space to provide further Covid-19 assistance to states or cost-of-living relief to households, the Treasurer continues to push back against calls to extend the 22c petrol excise relief beyond September.

“The good news is that the export boom is mostly turning up in the company tax take, which is set to outperform the budget-time expectations by many billions of dollars,” Mr Richardson said.

Gas exports more than doubled in the most recent financial year, from $40bn to $88bn.

A bumper crop for our farmers and high prices helped push rural goods export earnings from $45bn in 2020-21 to $64bn in the most recent financial year.

Iron ore export earnings were steadier, at $172bn in the year to June, against $181bn in the previous period.

The fossil fuel-led record trade surplus comes amid a political clash between the Albanese government and the Greens over the treatment of new coal and gas projects as the nation transitions to a greener economy.

On Thursday, the government passed legislation through the lower house enshrining its 43 per cent emissions reduction target in law. With the Greens controlling the balance of power in the Senate, Mr Bandt foreshadowed his party would take every opportunity to pressure the government into clamping down on new fossil fuel projects.

“We will push for coal and gas to stay in the ground in our discussion with the government about a safeguard mechanism,” he said.

“We’ll also be going through the budget line by line to ensure that no public money is going to support coal and gas projects.”

Economists said the impact on the real economy and employment would not be as great as the previous commodity boom, when mining investment reached a ­record 8 per cent of GDP and boosted wages and living standards.

Nonetheless, Ms Allen said higher export volumes over the three months to June – after ­accounting for increasing prices – would add 0.9 percentage points to real economic growth through the quarter.

ANZ economist Madeline Dunk said net exports could add as much as 1.5ppts.

Ms Dunk said the trade boom was likely near its peak.

“Australia’s golden run of trade windfalls has been underpinned by sales of coal, iron ore and LNG,” she said.

“But our biggest buyer, China, has been trying to limit its reliance on coal imports, and its steel output is expected to weaken this year. Given this and the fact that commodity prices appear to have peaked, we think the trade surplus will soon start to slide.”

Those assumptions included a halving in the iron ore price to $US55 a tonne by the end of the year, and a fall in metallurgical and thermal coal prices, respectively, to $US130/t and $US60/t.

“The new government has stuck to the very conservative budgeting practice around the commodity price assumptions, and hopefully that means we will continue to outperform, but at some stage the fairy dust will wear off,” Mr Richardson said.

Recently released forecasts from the Department of Industry, Science and Resources, however, suggest a much more resilient outlook and further upside to budget outcomes.

The DISER predicted iron ore to average $US99/t in this fin­ancial year, and $US74/t in the following year as Australian and Brazilian mines lift exports.

Energy producers will remain the beneficiaries of strong demand and prices. 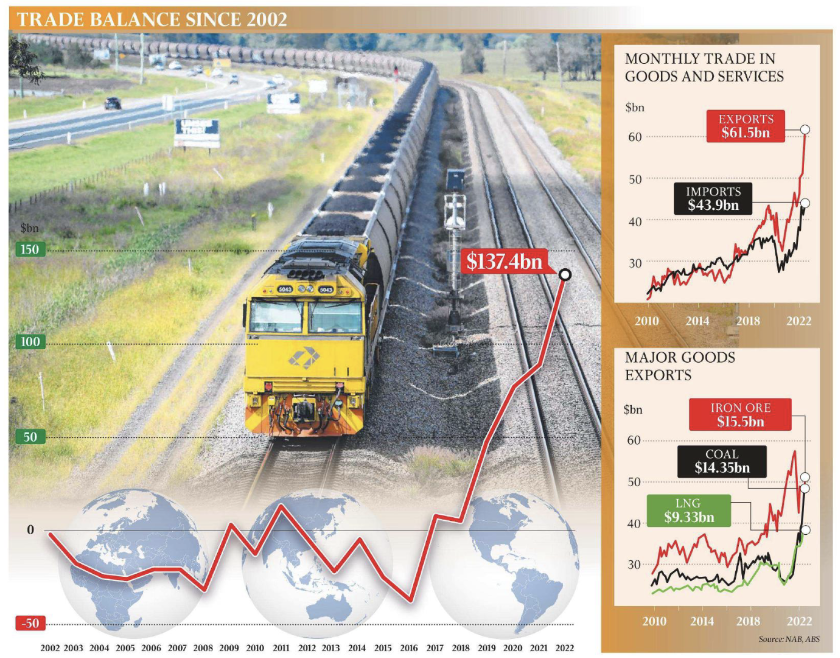