Article by Stephen Johnson courtesy of the Daily Mail Online

Western Australia has previously voted to secede from the rest of Australia and the home of billionaire tycoons could try again.

One of Australia’s most renowned constitutional law experts said any move to break away to form a new country could even spark military intervention from Canberra.

WA, the home of 2.6million people, is a near-monopoly producer of Australia’s biggest export iron ore, the commodity used to make steel.

The state Labor government conservatively rakes in $5billion a year from iron ore royalties.
National iron ore exports are worth more than $100billion a year, with Western Australia home to 98 per cent of Australia’s iron ore reserves, meaning the state rakes in about $38,000 per resident from those mineral deposits alone.

Two-thirds of that goes to China, Australia’s biggest trading partner.

Broken down again, iron ore last year made up 43 per cent of Australia’s exports to China by value.

WA is also less affected by the coronavirus crisis, with job numbers between March 14 and August 22 falling by one per cent – well below the national average of 4.2 per cent, Australian Bureau of Statistics payrolls data released on Tuesday showed.

By comparison, Victoria has suffered a 7.9 per cent fall with Melbourne in a strict, Stage Four lockdown with an 8pm to 5am curfew.

Being a mining powerhouse, WA often considered itself to be separate to the rest of the country – even before it closed its border in April for the first time ever.

That is perhaps unsurprising considering the capital Perth – the home of mining billionaires Gina Rinehart and Andrew Forrest and media mogul Kerry Stokes – is closer to Singapore than Sydney.

In April 1933, at the height of the Great Depression, 66 per cent of West Australians voted yes in a referendum to secede from the rest of Australia.

The Nationalist premier Sir James Mitchell was elected three years earlier on a platform of breaking away from the rest of the country to form a new nation, Westralia.

Despite two-thirds of West Australians voting yes, the British Parliament said no after receiving a petition from the state.

Constitutional law expert Professor George Williams, the deputy vice-chancellor of the University of New South Wales, said this petition was ruled as being out of order because it didn’t come from the federal government.

‘The Commonwealth opposed secession, and so the matter ended when it became clear that Western Australia would not resort to force or illegal action in the hope of having its way,’ he told Daily Mail Australia.

Even if WA voted yes again to become an independent nation, it couldn’t become a separate country unless a majority of voters in a majority of states voted yes.

This is an unlikely scenario give that just eight referendums out of 44 have succeeded since Federation in 1901.

‘Secession is no more likely to succeed today. Australia’s Constitution simply does not contemplate any part of the nation breaking away, with no state having the right to unilaterally leave the Federation,’ Professor Williams said.

‘Any attempt to do so could provoke legal or even military intervention from a Commonwealth charged with ensuring that the law is upheld.’

For now, WA’s Labor Premier Mark McGowan is using its state police to stop other Australians from crossing the Nullarbor Plain in a bid to stop the spread of COVID-19 from the eastern states.

He has resisted calls from Prime Minister Scott Morrison to reopen the state to the rest of Australia.

The state leader, born and raised in New South Wales, will have his way unless billionaire mining magnate Clive Palmer manages to convince the High Court this is a breach of Section 92 of the Constitution which says that ‘trade, commerce and intercourse among the states … shall be absolutely free’.

While Victoria and NSW cross subsidised Western Australia for most of its history as a state, in recent decades the federal government has considered WA to be so self sufficient it diluted its share of GST proceeds.

As recently as 2015-16, the Commonwealth Grants Commission allocated just 30 cents from every dollar of the Goods and Services Tax collected.

WA may well need more GST funds in coming years, when the Simandou iron ore mine in the west African nation of Guinea possibly begins production in as little as five years.

Brazil could also ramp up iron ore production, as it recovers from the Vale tailings dam disaster in January 2019 that killed 270 people.

University of Sydney constitutional law expert Professor Anne Twomey said WA was likely to need the rest of Australia when China no longer needed so much of its iron ore.

‘Now that it has become a contributor, rather than a recipient, it has complained,’ she told Daily Mail Australia.

‘Perhaps once it has contributed to the other states for around a century, as New South Wales and Victoria have done, it might be justified in its complaints.

‘It is more likely, however, that when the minerals boom ceases, Western Australia will become a recipient again. It should therefore be careful about what it wishes.’ 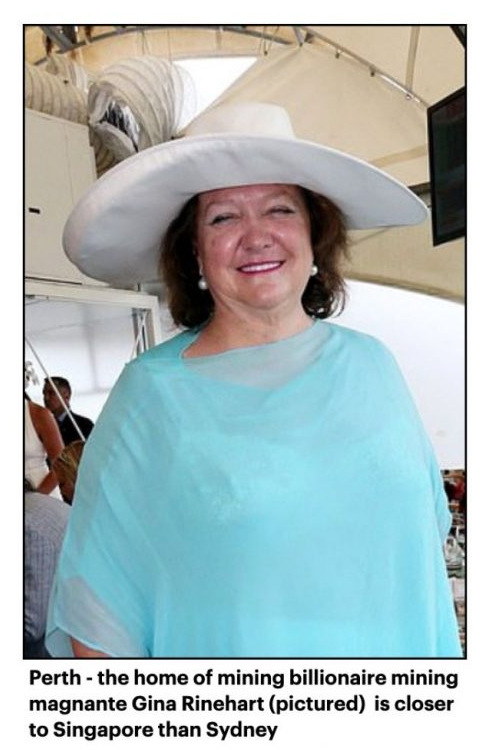