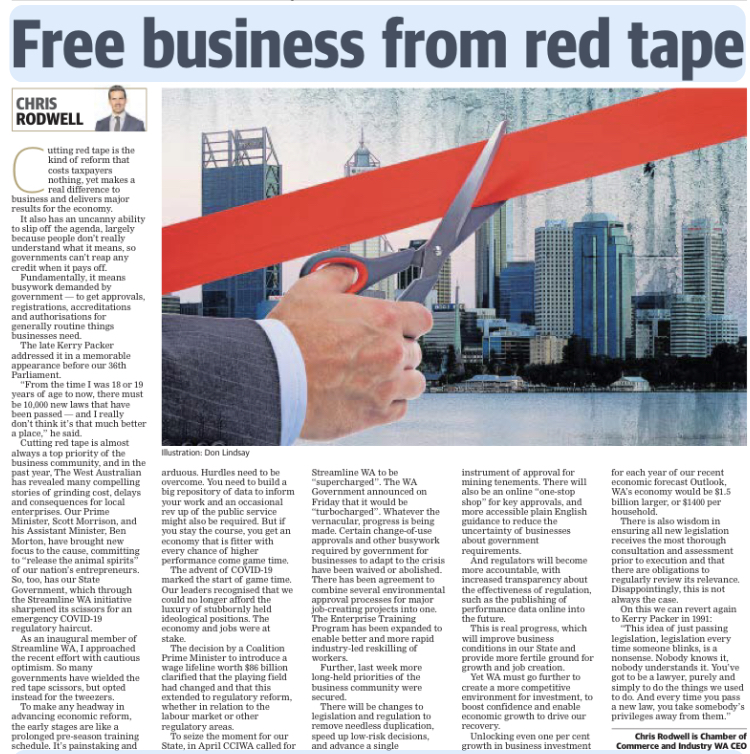 Article by Chris Rodwell courtesy of the West Australian

Cutting red tape is the kind of reform that costs taxpayers nothing, yet makes a real difference to business and delivers major results for the economy.

It also has an uncanny ability to slip off the agenda, largely because people don’t really understand what it means, so governments can’t reap any credit when it pays off.

Fundamentally, it means busywork demanded by government — to get approvals, registrations, accreditations and authorisations for generally routine things businesses need.

The late Kerry Packer addressed it in a memorable appearance before our 36th Parliament.

Cutting red tape is almost always a top priority of the business community, and in the past year, The West Australian has revealed many compelling stories of grinding cost, delays and consequences for local enterprises. Our Prime Minister, Scott Morrison, and his Assistant Minister, Ben Morton, have brought new focus to the cause, committing to “release the animal spirits” of our nation’s entrepreneurs. So, too, has our State Government, which through the Streamline WA initiative sharpened its scissors for an emergency COVID-19 regulatory haircut.

As an inaugural member of Streamline WA, I approached the recent effort with cautious optimism. So many governments have wielded the red tape scissors, but opted instead for the tweezers.

To make any headway in advancing economic reform, the early stages are like a prolonged pre-season training schedule. It’s painstaking and arduous. Hurdles need to be overcome. You need to build a big repository of data to inform your work and an occasional rev up of the public service might also be required. But if you stay the course, you get an economy that is fitter with every chance of higher performance come game time.

The advent of COVID-19 marked the start of game time. Our leaders recognised that we could no longer afford the luxury of stubbornly held ideological positions. The economy and jobs were at stake.

The decision by a Coalition Prime Minister to introduce a wage lifeline worth $86 billion clarified that the playing field had changed and that this extended to regulatory reform, whether in relation to the labour market or other regulatory areas.

To seize the moment for our State, in April CCIWA called for Streamline WA to be “supercharged”. The WA Government announced on Friday that it would be “turbocharged”. Whatever the vernacular, progress is being made. Certain change-of-use approvals and other busywork required by government for businesses to adapt to the crisis have been waived or abolished. There has been agreement to combine several environmental approval processes for major job-creating projects into one. The Enterprise Training Program has been expanded to enable better and more rapid industry-led reskilling of workers.

There will be changes to legislation and regulation to remove needless duplication, speed up low-risk decisions, and advance a single instrument of approval for mining tenements. There will also be an online “one-stop shop” for key approvals, and more accessible plain English guidance to reduce the uncertainty of businesses about government requirements.

And regulators will become more accountable, with increased transparency about the effectiveness of regulation, such as the publishing of performance data online into the future.

This is real progress, which will improve business conditions in our State and provide more fertile ground for growth and job creation.

Yet WA must go further to create a more competitive environment for investment, to boost confidence and enable economic growth to drive our recovery.

Unlocking even one per cent growth in business investment for each year of our recent economic forecast Outlook, WA’s economy would be $1.5 billion larger, or $1400 per household.

There is also wisdom in ensuring all new legislation receives the most thorough consultation and assessment prior to execution and that there are obligations to regularly review its relevance. Disappointingly, this is not always the case.

On this we can revert again to Kerry Packer in 1991:

“This idea of just passing legislation, legislation every time someone blinks, is a nonsense. Nobody knows it, nobody understands it. You’ve got to be a lawyer, purely and simply to do the things we used to do. And every time you pass a new law, you take somebody’s privileges away from them.”

Chris Rodwell is Chamber of Commerce and Industry WA CEO