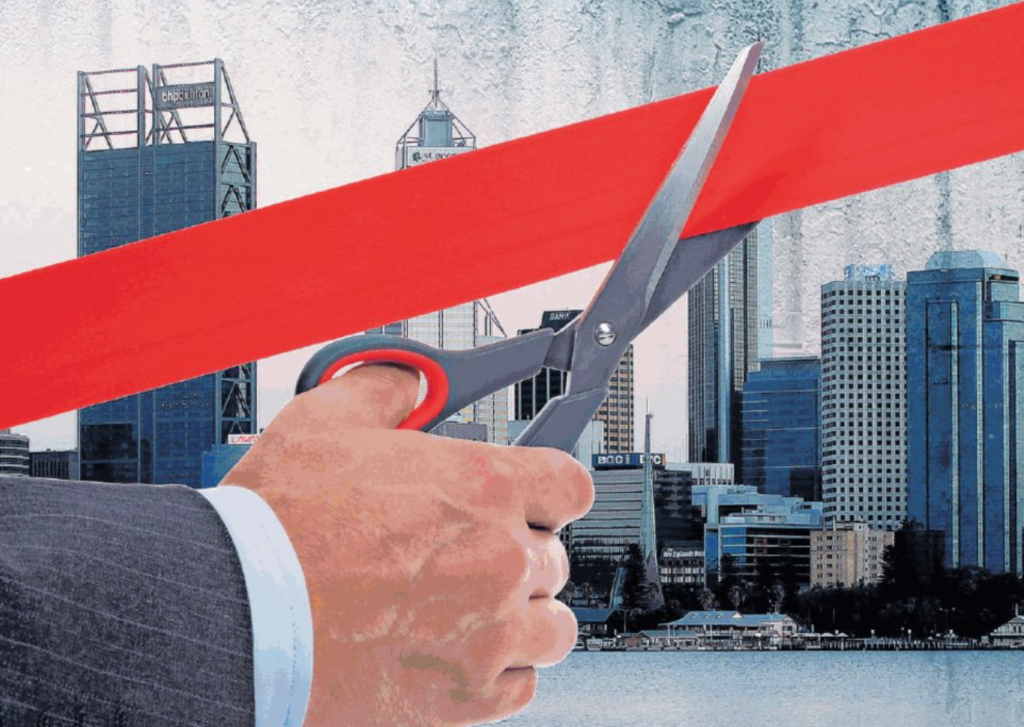 Article by Cian Hussey courtesy of the West Australian

The WA State Government is leading the way for a post-lockdown recovery based on slashing business-crushing red tape to support small businesses.

Premier Mark McGowan’s moves to make it easier for certain businesses to change how they use their premises and streamline the process for development applications are welcome.

However, the Government can and must go further in cutting red tape to make WA an economic powerhouse in the wake of the devastating lockdown which has smashed the productive private economy.

Red tape imposes an enormous burden, reducing economic output to the tune of $176 billion across Australia each year.

While this is a dangerous handbrake on prosperity, it is also a serious moral issue.

By preventing people from starting new businesses, innovating new products and creating opportunities for themselves and their families, red tape stifles the aspirational spirit that drives so many West Australians.

Recent analysis by the Institute of Public Affairs estimated that the private sector has been crippled by the coronavirus lockdowns, while the public sector remains relatively unscathed.

Jobs in the private sector have decreased by 7.7 per cent since the middle of March while the public sector has seen only a 1.7 per cent decline.

Despite politicians insisting that “we are all in this together”, their pay and hours remain the same while 1.3 million people have had to work fewer hours and another 900,000 have lost their jobs entirely, according to data from the Australian Bureau of Statistics.

This environment, where the private sector is punished while the public sector remains unscathed, cannot be maintained if there is to be an economic recovery.

The private sector accounts for 80 per cent of economic activity, and it is only by taxing this activity that we can afford public services such as roads, schools, and hospitals — including ICUs for coronavirus patients.

The number one priority must be maximising this wealth creation, and slashing red tape is one of the best ways to do this.

The link between red tape and economic prosperity is clear.

Cutting red tape allows for more businesses, more jobs, and higher wages. It allows people to experience the dignity of work, and encourages people to be enterprising by reducing unnecessary compliance costs.

Small businesses are vital to the West Australian economy.

According to the most recent data from the ABS, there are 226,416 small businesses in WA. At least there were before the lockdown started in March.

Creating new businesses is essential to the economic recovery. Small businesses don’t just provide an income to their owners and employees, they provide a sense of community and a ladder to prosperity.

WA has been incredibly successful in containing COVID-19 , and has done so without carelessly treading on freedoms as the Eastern States so willingly did.

The WA Government should quickly lift the remaining restrictions on businesses, while maintaining social distancing and hygiene requirements.

After allowing all businesses to reopen, Mr McGowan must slash red tape.

The tentative steps taken in this direction are encouraging, but there is no shortage of overzealous regulation that can be discarded.

WA has 107,812 individual regulations on the books, according an IPA analysis published last year.

Food truck owners who want to set up at the local park or do the rounds of the suburbs are simply not allowed to do so.

They can only serve customers in registered areas and at certain events, all of which have been cancelled.

Chauffeurs who have seen their bookings drop by 80 per cent or more are still required to pay 10 per cent of every fare to the Government’s taxi plate buy-back scheme. And that’s in addition to GST.

And when a Perth surgeon wanted to start an intimate, high-end wine bar on William Street, he was forced to spend upwards of $12,000 on communicating with police about his liquor licence.

This kind of onerous and petty red tape is simply unaffordable in the post-COVID-19 economy.

Mr McGowan must set an example for his Eastern States peers. By slashing red tape, the Government will allow West Australians to create a bonanza State once again. Cian Hussey is a research fellow at the Institute of Public Affairs.