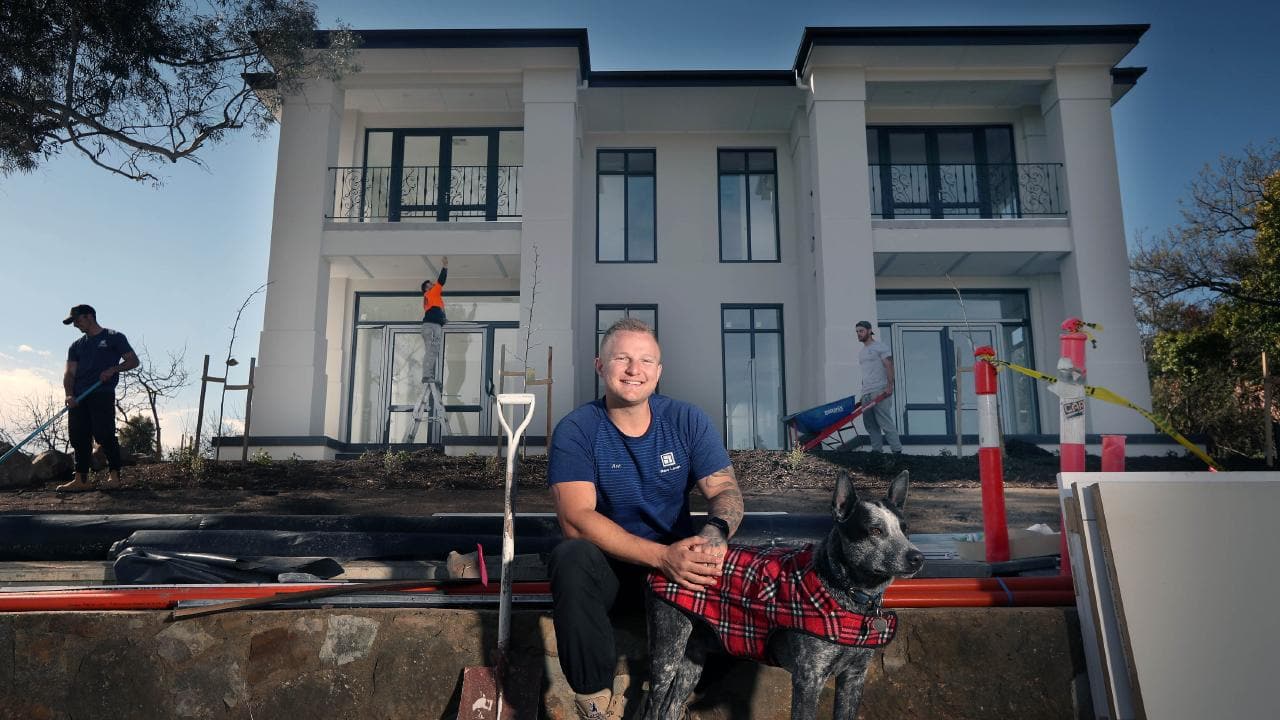 Article by Geoff Chambers, courtesy of The Australian

Landscaper Ash Carter, with his dog Bruce, at a new home builder in Canberra that is close to completion.

Picture: Gary Ramage Families and investors are having to fork out up to half the cost of new house-and-land packages on surging taxes and red-tape costs, as the construction industry battles with a slowdown exacerbated by tough credit restrictions and low consumer confidence.

The nation’s peak housing and building bodies will today release reports highlighting the tax and red-tape burdens holding back house and apartment construction in the major capital cities, warning that “consumer and builder confidence” is crucial to reignite the sector.

A Centre for International Economics report, commissioned by the Housing Industry Association, lists levies, stamp duty, GST, council rates and land tax as key factors driving up the cost to build new homes. The report cautions that the majority of the tax burden is being transferred to households, with 14 per cent of GST revenue raised from the housing sector, in addition to 10 per cent of all revenue raised across three tiers of government.

In its biannual forecast to be released today, Master Builders Australia predicts the new home building slump will bottom out during 2020-21, recording a 28.3 per cent drop since 2015-16. It attributes the slowdown to tougher financial regulations, tighter credit conditions and “heavy stamp duty surcharges on foreign buyers” by state governments.

The HIA data shows the average cost of red tape and tax incurred in the construction of a house and land package as a percentage of the purchase price is 50 per cent in Sydney, 37 per cent in Melbourne and between 29 per cent and 33 per cent in Brisbane, Perth and Adelaide. Other factors driving up costs to build a new home include red tape, consultant and inspection reports, council charges and insurance costs.

Housing Minister Michael Sukkar said state and territory governments were adding “enormous costs and delays to the construction of new housing” because of their “truncated, uncertain and slow planning and regulatory regimes”.

“It is unacceptable that the red tape and tax incurred in the construction of a ‘house and land’ package as a percentage of the purchase price is 50 per cent in Sydney and 37 per cent in Melbourne, as outlined in this report,” Mr Sukkar said.

“It is also unacceptable that the supply of new housing is so badly constrained by state and territory planning and regulatory bottlenecks.”

Mr Bare said having to pay $417,000 on taxes and regulatory costs on an average home was too much. “Housing is one of the most heavily taxed sectors of the economy, alongside the ‘vice taxes’ applied to cigarettes and alcohol,” he said.

Master Builders Australia chief economist Shane Garrett said there was “no immediate end in sight to the new home building slump” but predicted a recovery was on the horizon.

“Over the past decade, new home building in Australia hit record highs thanks to the unique combination of record inward migration and remarkably low interest rates.

“The recent slowdown in new home building is largely down to micro-economic factors: tighter credit conditions, tougher financial regulations and the imposition of heavy stamp duty surcharges on foreign buyers by a number of state governments.

“Underlying demand for new housing is still very strong, with large numbers of new jobs still being created and interest rates now even lower than before.

The MBA pinpoints “consumer and builder confidence” as a critical factor to boost the sector, and predicts it will take time for confidence to return, with house prices falling in most markets.

“From there, we expect that the strong market fundamentals will drive new home building higher,” he said.

“For home renovations work, a record volume of detached houses approaching their 30th birthdays is good news, not to mention the availability of very low borrowing costs. Our forecasts envisage that the market for major home renovations will grow from $8.97 billion in 2018-19 to $9.38bn in 2023-24, a gain of 4.6 per cent.”

The government’s First Home Loan Deposit scheme will commence on January 1. Mr Sukkar said the federal government was also increasing housing supply and “setting an example for state and territory governments, by accelerating the divestment of surplus commonwealth land for housing projects”.

“Stamp duty on the land and the house, GST, land tax, council rates, payroll, income and company taxes combine to raise almost $180,000 in taxes on a typical new house and land package. This does not include the additional $40,000 in development charges or the $220,000 incurred in red tape.”

Landscaper Ash Carter said business had slowed because buyers were concerned about the number of regulations, and he was forced to spend more money gaining approvals. “There are so many certificates and rules. Building a house is stressful enough and it doesn’t help either the builders or buyers to spend that extra time and patience with all these hoops.”

He said by the time landscapers were involved in the process, “we find people don’t want to do much”. He called for a “more centralised base” to cut red tape.

“You spend a lot more money on getting the certificates than the work you’re doing,” he said. “We need to go to five or six departments for these certificates. Having a single place to go to would be much better.”