Article by Daniel Wilde courtesy of the Courier Mail. 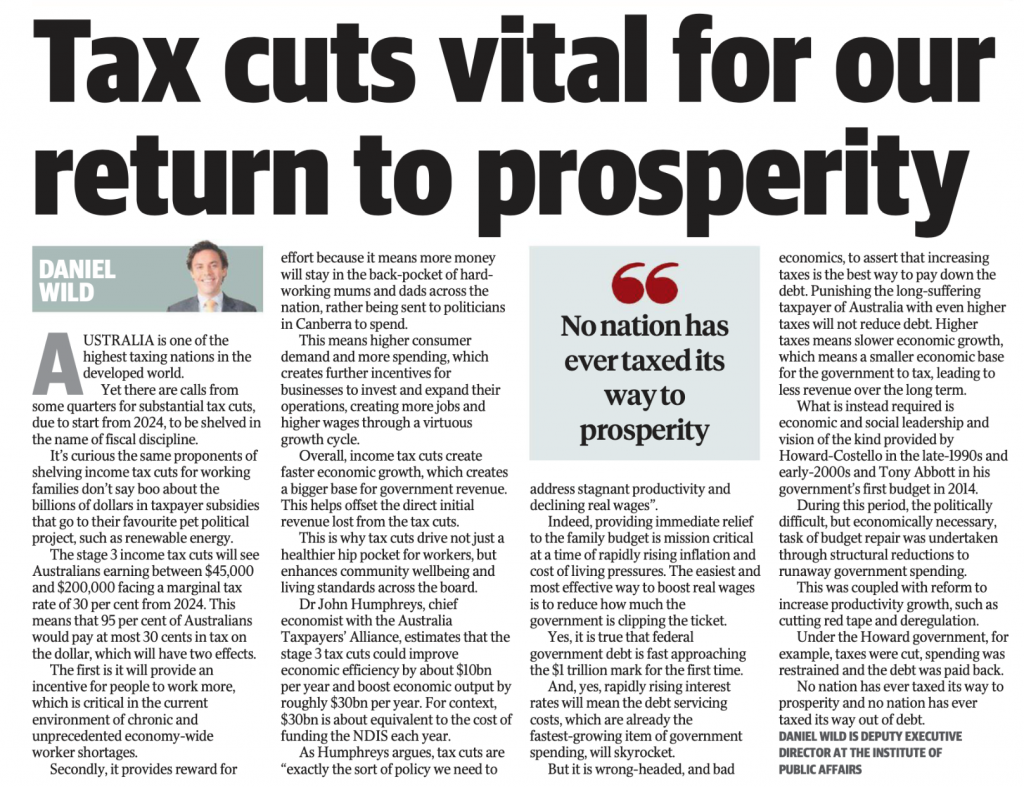 AUSTRALIA is one of the highest taxing nations in the developed world.

Yet there are calls from some quarters for substantial tax cuts, due to start from 2024, to be shelved in the name of fiscal discipline.

It’s curious the same proponents of shelving income tax cuts for working families don’t say boo about the billions of dollars in taxpayer subsidies that go to their favourite pet political project, such as renewable energy.

The stage 3 income tax cuts will see Australians earning between $45,000 and $200,000 facing a marginal tax rate of 30 per cent from 2024. This means that 95 per cent of Australians would pay at most 30 cents in tax on the dollar, which will have two effects.

The first is it will provide an incentive for people to work more, which is critical in the current environment of chronic and unprecedented economy-wide worker shortages.

Secondly, it provides reward for effort because it means more money will stay in the back-pocket of hardworking mums and dads across the nation, rather being sent to politicians in Canberra to spend.

This means higher consumer demand and more spending, which creates further incentives for businesses to invest and expand their operations, creating more jobs and higher wages through a virtuous growth cycle.

This helps offset the direct initial revenue lost from the tax cuts.

This is why tax cuts drive not just a healthier hip pocket for workers, but enhances community wellbeing and living standards across the board.

Dr John Humphreys, chief economist with the Australia Taxpayers’ Alliance, estimates that the stage 3 tax cuts could improve economic efficiency by about $10bn per year and boost economic output by roughly $30bn per year. For context, $30bn is about equivalent to the cost of funding the NDIS each year.

As Humphreys argues, tax cuts are “exactly the sort of policy we need to address stagnant productivity and declining real wages”.

Indeed, providing immediate relief to the family budget is mission critical at a time of rapidly rising inflation and cost of living pressures. The easiest and most effective way to boost real wages is to reduce how much the government is clipping the ticket.

Yes, it is true that federal government debt is fast approaching the $1 trillion mark for the first time.

And, yes, rapidly rising interest rates will mean the debt servicing costs, which are already the fastest-growing item of government spending, will skyrocket.

But it is wrong-headed, and bad economics, to assert that increasing taxes is the best way to pay down the debt. Punishing the long-suffering taxpayer of Australia with even higher taxes will not reduce debt. Higher taxes means slower economic growth, which means a smaller economic base for the government to tax, leading to less revenue over the long term.

What is instead required is economic and social leadership and vision of the kind provided by Howard-Costello in the late-1990s and early-2000s and Tony Abbott in his government’s first budget in 2014.

During this period, the politically difficult, but economically necessary, task of budget repair was undertaken through structural reductions to runaway government spending.

This was coupled with reform to increase productivity growth, such as cutting red tape and deregulation.

Under the Howard government, for example, taxes were cut, spending was restrained and the debt was paid back.